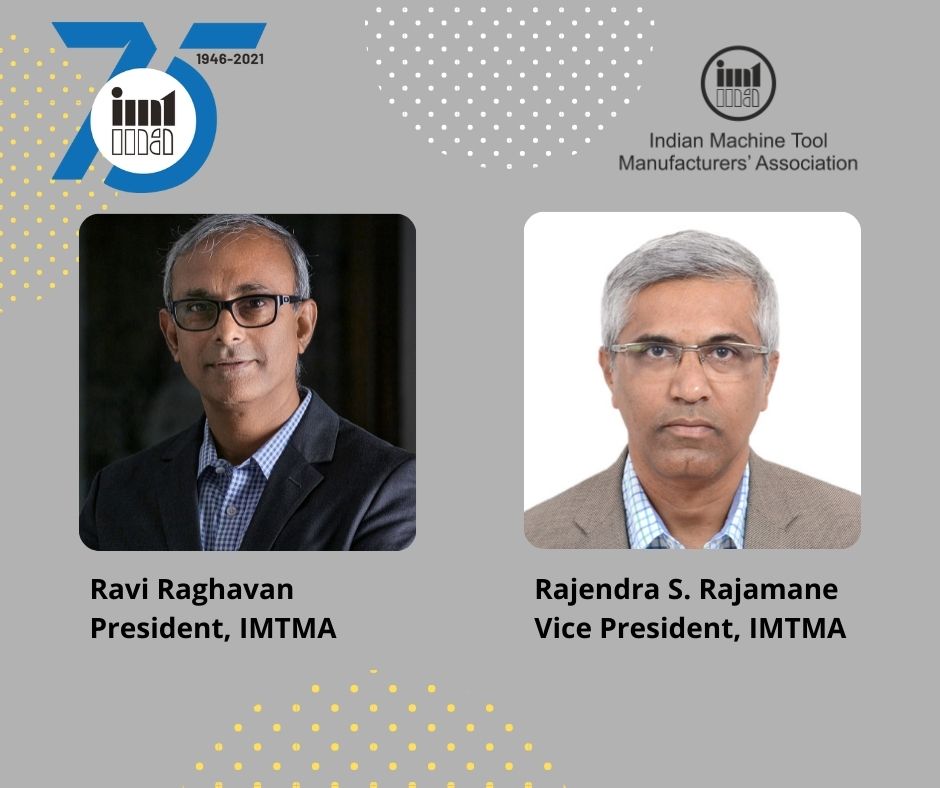 This year’s AGM was a special one for IMTMA as the Association, which was formed on 20th September 1946, completed 75 years. From a 19 member team at the time of its formation in 1946, the Association has grown to have over 460 members. A logo commemorating IMTMA’s 75 years was unveiled and a corporate video tracing the history of IMTMA was played at the AGM.

Expressing his thoughts on IMTMA completing 75 years, Mr. Indradev Babu, Outgoing President of IMTMA said, “As we celebrate this milestone, it is time to remember our industry luminaries who were the guiding light for IMTMA in its formative years and played a pivotal role in establishing IMTEX and Bangalore International Exhibition Centre (BIEC). The vision set by them will be instrumental in moving IMTMA to its next phase of growth.”

Concurring with Mr. Babu’s views, Mr. Ravi Raghavan, the President of IMTMA for the year 2021-2022 said, “IMTMA will continue to tackle the numerous challenges faced by the machine tool industry in regard to supply of raw materials, working capital, tariff protection, import regulations, government purchases of machine tools, and so on.”

Speaking about IMTMA’s growth over the years at the 75th AGM, Mr. Jamshyd N. Godrej, Past President, IMTMA said, “IMTEX, was a unique initiative of IMTMA and marked the beginning of trade fairs in India. BIEC, established by IMTMA in Bengaluru, has expanded significantly and hosts many shows. IMTMA’s close association with various industries has been helped its growth over the years.”

Supporting Mr. Narendran’s views, Mr. Sunjay J. Kapur congratulated IMTMA for the glorious milestone and added that the Association has played a significant role in developing India’s engineering and manufacturing streams. He added that automobile and auto component industries have always considered machine tools as integral for its growth.

Speaking about IMTMA’s onward journey, Mr. V. Anbu, Director General & CEO, IMTMA and BIEC said, “As India moves towards the next phase of growth with $5 trillion economy in sight and manufacturing industry’s share being about $1 trillion in it, machine tool industry should look forward towards a quick adoption of new-age technologies to achieve this vision. IMTMA will continue to play an enabling role in this.”